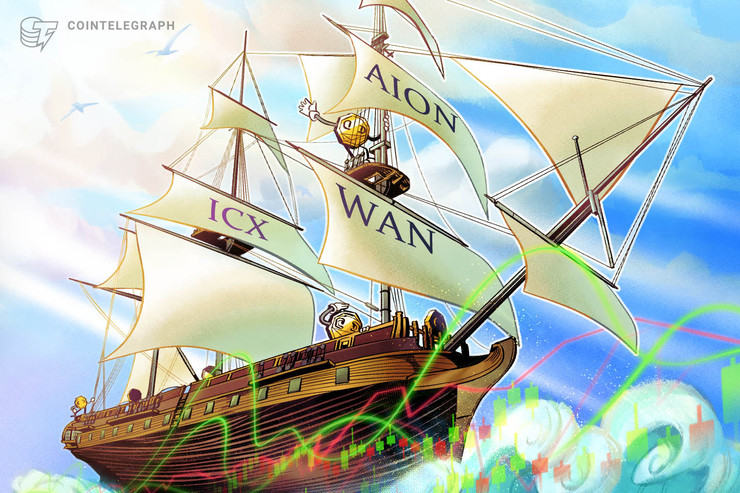 Bitcoin (BTC) and large-cap cryptocurrencies have shown significant strength over the past few weeks but traders are also starting to pay attention to smaller cap coins. One of these coins is Icon (ICX), which has surged more than 200% over the past three weeks.

Similarly, WanChain (WAN) and AION (AION) also gained 60% and 120%, therefore an analysis of these coins is warranted.

Bitcoin recently broke out of a 7-month downtrend and as this happened many other coins broke their 2-year old downtrends. An example is shown through the chart of Icon.

The chart is showing a clear break of the 2-year old downtrend, which resulted in an upwards surge towards $0.39. This surge is a move of more than 200% in a matter of weeks.

The chart is also showing an apparent breakthrough of a critical level, which is the $0.18 level (green horizontal line).

Some things to bear in mind; significant upwards rallies of this size cause FOMO (fear of missing out) amongst traders. However, such an upwards rally usually retraces and corrects to find new support areas.

Given that the chart is showing an RSI of 95, it’s likely to see some correction before continuation.

The 12-hour chart is showing similarities with the 1-day chart. An apparent breakthrough of a downtrend, which caused a strong upwards move. The RSI is also at very high levels, indicating that the price needs some consolidation before continuation.

The ICX/BTC pair recently broke out of a 6-month sideways range and immediately rallied towards the next resistance. This resistance is found at 0.00004000 – 0.00004200 satoshis where the price is currently hovering.

The first level is the primary area to go for. In bullish momentum, retracements are relatively short as buyers are running over each other to get into the asset.

Usually, when Icon starts to move, the other interoperability coins follow suit, as these coins are connected. WanChain is one such coin and it surged around 65% in the past three weeks.

WanChain broke through the resistance at $0.20 and rallied towards the next level at $0.27 at which it’s currently hovering. A breakthrough of this level would result in a continuation of the next resistance. This resistance is found at $0.48 and would warrant another move of 80%.

However, if WanChain can’t break through this level, a retest of the previous resistance is likely to occur. Such a move would mean a retest of the green zone around $0.20.

The WAN/BTC pair is showing similarities with the USD pair as its pinned in by a nearly identical resistance zone.

WAN is currently unable to push through this level. However, a breakthrough would generally follow a continuation towards the next resistance which is found at 0.00004500 – 0.00004700 satoshis.

Aion is showing similarities with the Icon chart. A powerful upwards rally led the price to hit significant resistances and the surge took place on a sharp increase in volume.

Arguably, do we see a break upwards here or not? At this point, Aion is facing massive resistance and it didn’t break through it like the other altcoins.

A healthy correction towards $0.09 or $0.10 would suit the movements of Aion as this would allow new support to be found.

The AION/ BTC chart shows that Aion is currently hovering against massive resistance and it’s unlikely to break upwards from here in one go, especially given the state of the RSI.

However, if the price breaks through this resistance, the party can continue.