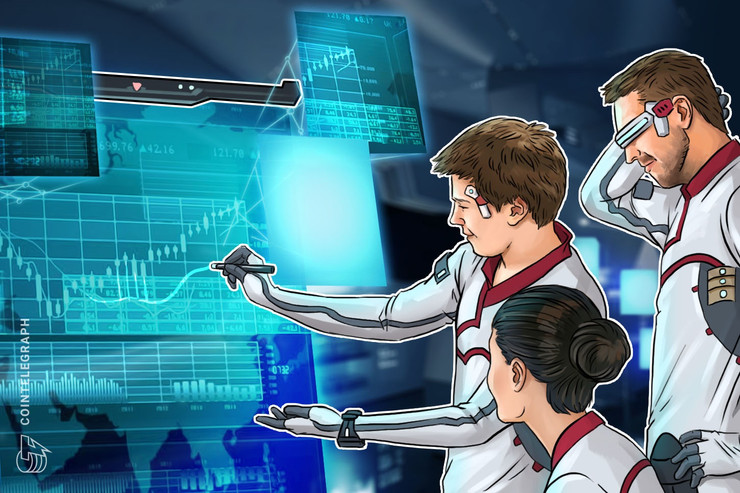 Bitcoin (BTC) and other cryptocurrencies have been compared to FAANG (Facebook, Apple, Amazon, Netflix and Google) companies due to their network effects, as reported by Cointelegraph. The rationale that the increase in people using a platform makes its value increase exponentially — as it happens with Facebook or the App Store — is applied to cryptocurrencies at large: The more people that hold a crypto asset, the bigger increase in market value.

Further reports have suggested that these companies intend to launch their coins after Facebook’s Libra introduction to the market. Some of these companies have been the darlings of the stock market, but recent shifts in consumer preferences show that a segment of the population (i.e., millennials) already prefer investing in Bitcoin instead of FAANG stocks like Netflix. While this is intriguing, the question is: Are investors better off investing in Bitcoin and other cryptocurrencies than in FAANG stocks?

Bitcoin, Ether and XRP gains since 2017

XRP is one of the most mature coins in the market, being a top currency since August 2013 alongside Bitcoin. Even though Ether (ETH) is a more recent currency, it has achieved a top position in the market since August 2015 due to its unique applicable features. However, if an investor bought each of these three currencies in January 2017, XRP would have retrieved the highest return — 440% at the end of 2019.

During the same period, Ether returned 379% to investors, while Bitcoin offered the worst performance of the three with a cumulative return of 301%. This strategy does not include the price spikes that occurred during this time, which could have made an investor extra profits and consequently could switch the order of performance shown. The method simply relies on a straight investment strategy of buying each on Jan. 1, 2017, and selling it on Dec. 31, 2019. 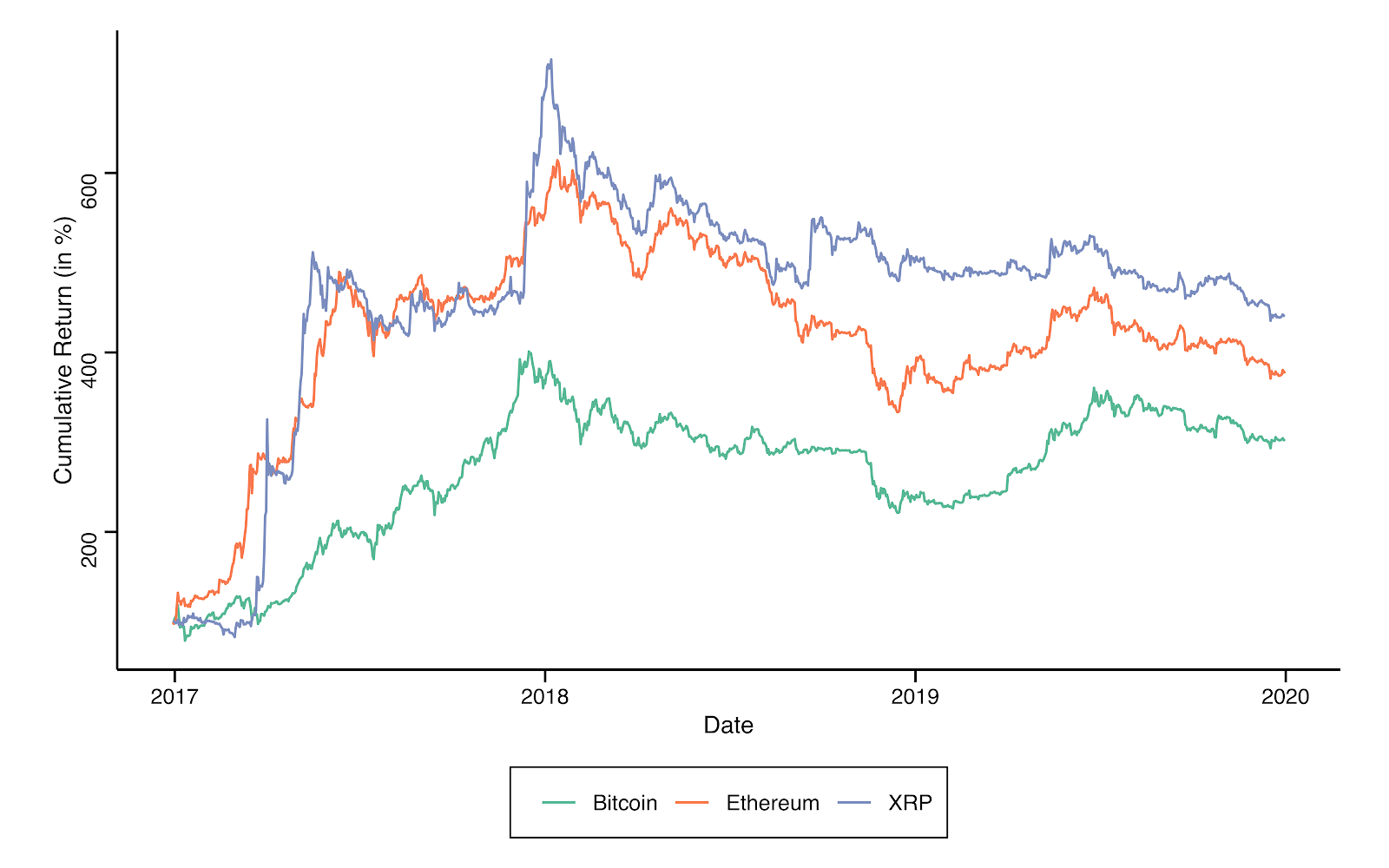 Analyzing the same currencies from a risk-adjusted performance, Ether is the best option for investors to take advantage of its high price gain (annualized mean return) while accounting for its volatility (annualized standard deviation) at a 0.84 Sharpe ratio — a risk-adjusted performance for investor to evaluate the risk/return reward of an investment — which is a suboptimal performance (i.e., a Sharpe ratio under 1).

In this scenario, Bitcoin comes second with a 0.81 Sharpe ratio, while XRP offers the worst option with a 0.75 Sharpe ratio. All the measures are under 1, meaning that investors may be taking too much risk for the return they are getting by investing in either of these cryptocurrencies. 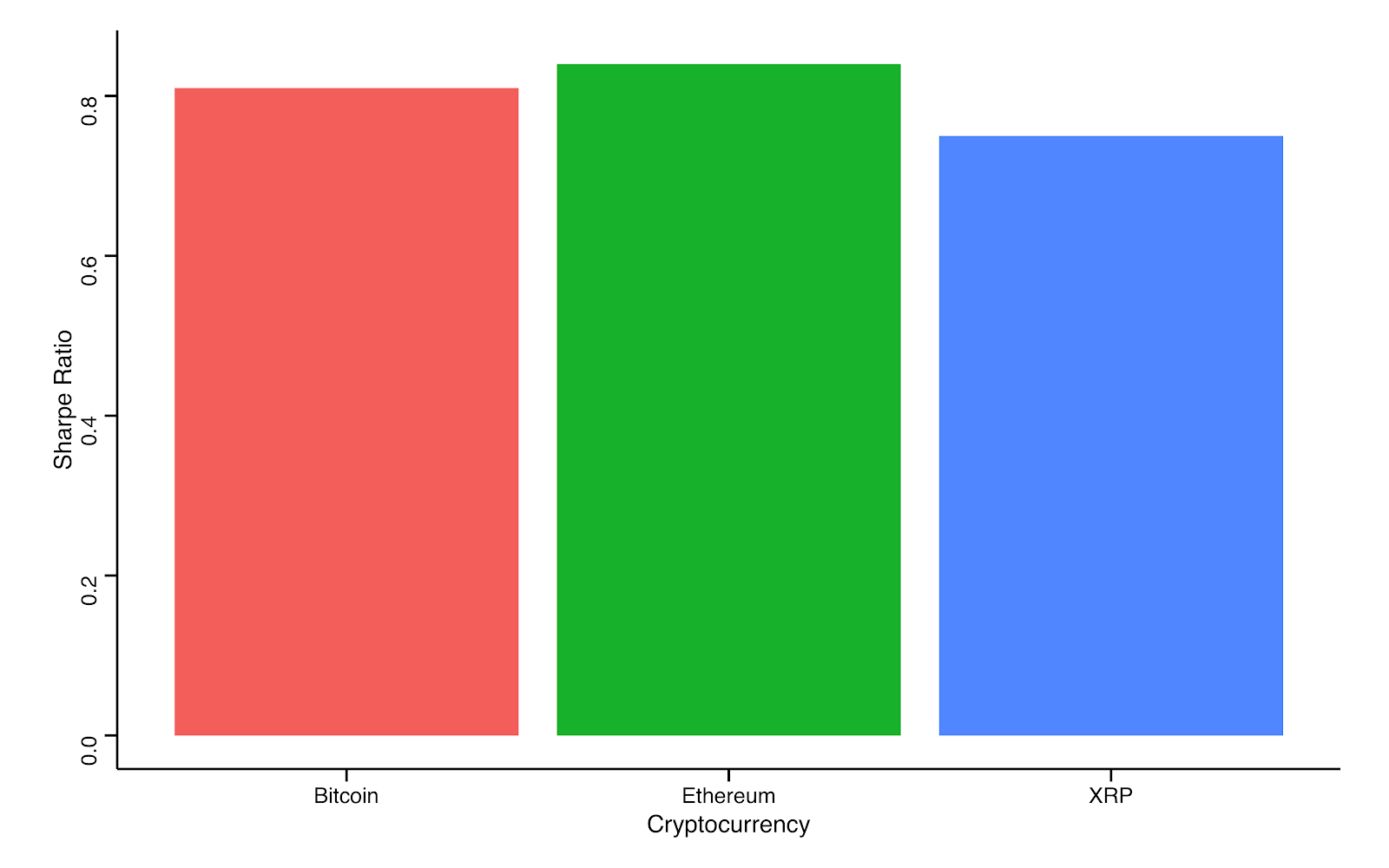 How do FAANG stocks compare for the same time period?

If the same investors chose to buy FAANG stocks instead of cryptocurrencies in January 2017, they would have a lower cumulative return at the end of 2019 no matter which tech company was chosen. 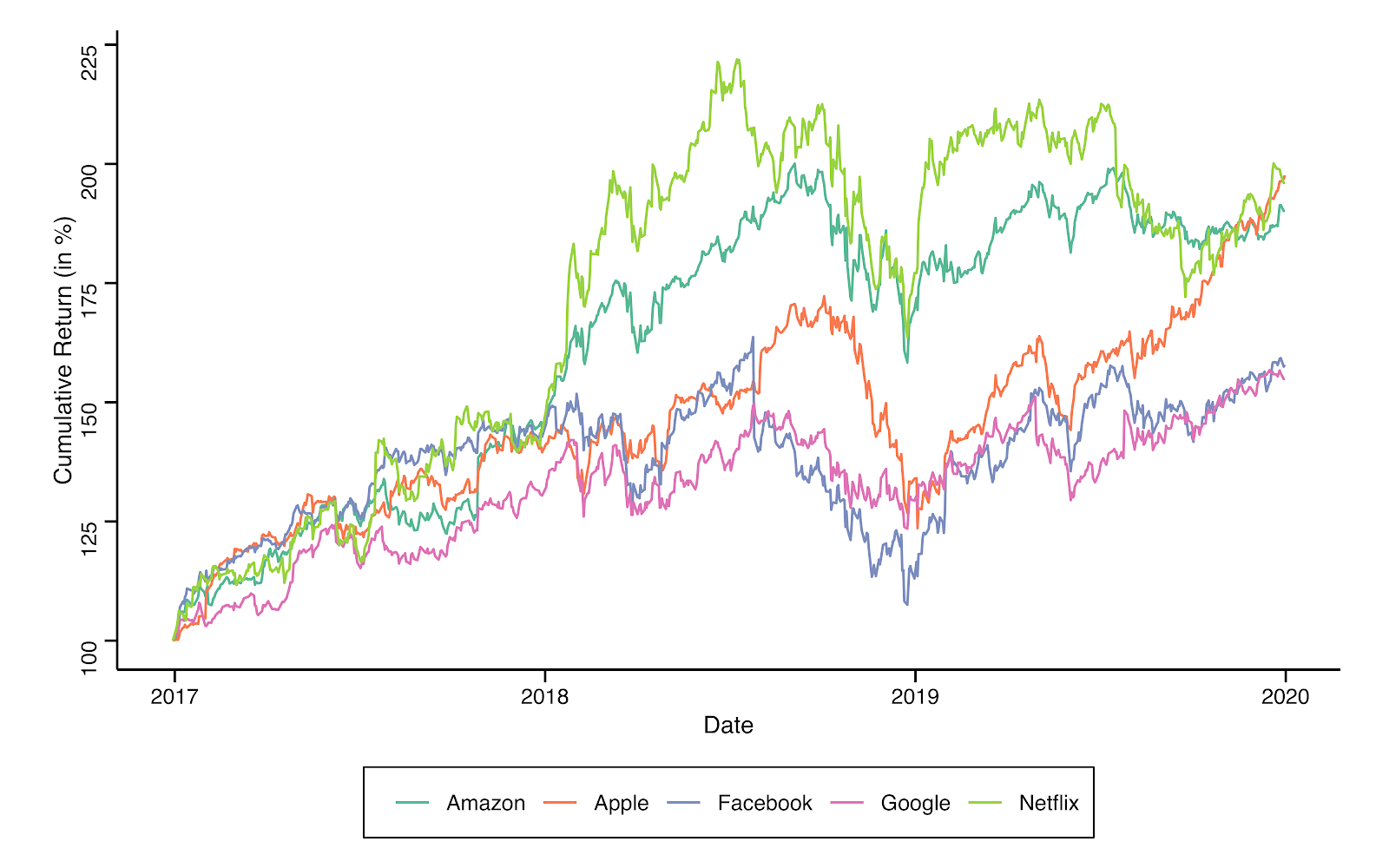 FAANG stocks offer a lower price gain than cryptocurrencies, but they do provide better risk-adjusted performance than any of the three top cryptocurrencies — Facebook being the exception to the rule. When looking at Sharpe ratios for each FAANG stock, Apple offers the best chance to generate higher returns when accounting for its risk exposure with a 1.59 Sharpe ratio, almost twice the ratios displayed by Bitcoin or XRP.

Amazon shows the second-best option for investors with a 1.33 Sharpe ratio, followed by Netflix at 1.04. These three stocks present Sharpe ratios over 1, which means they are giving investors a fair to good return based on the risk they are vulnerable to.

However, investors looking into Google or Facebook will be more prone to risk and not necessarily get the return they would expect at that risk level because they both show Sharpe ratios under 1. Nonetheless, Google is still a better risk-adjusted option (with a 0.95 Sharpe ratio) to invest in than Bitcoin, Ether or XRP. 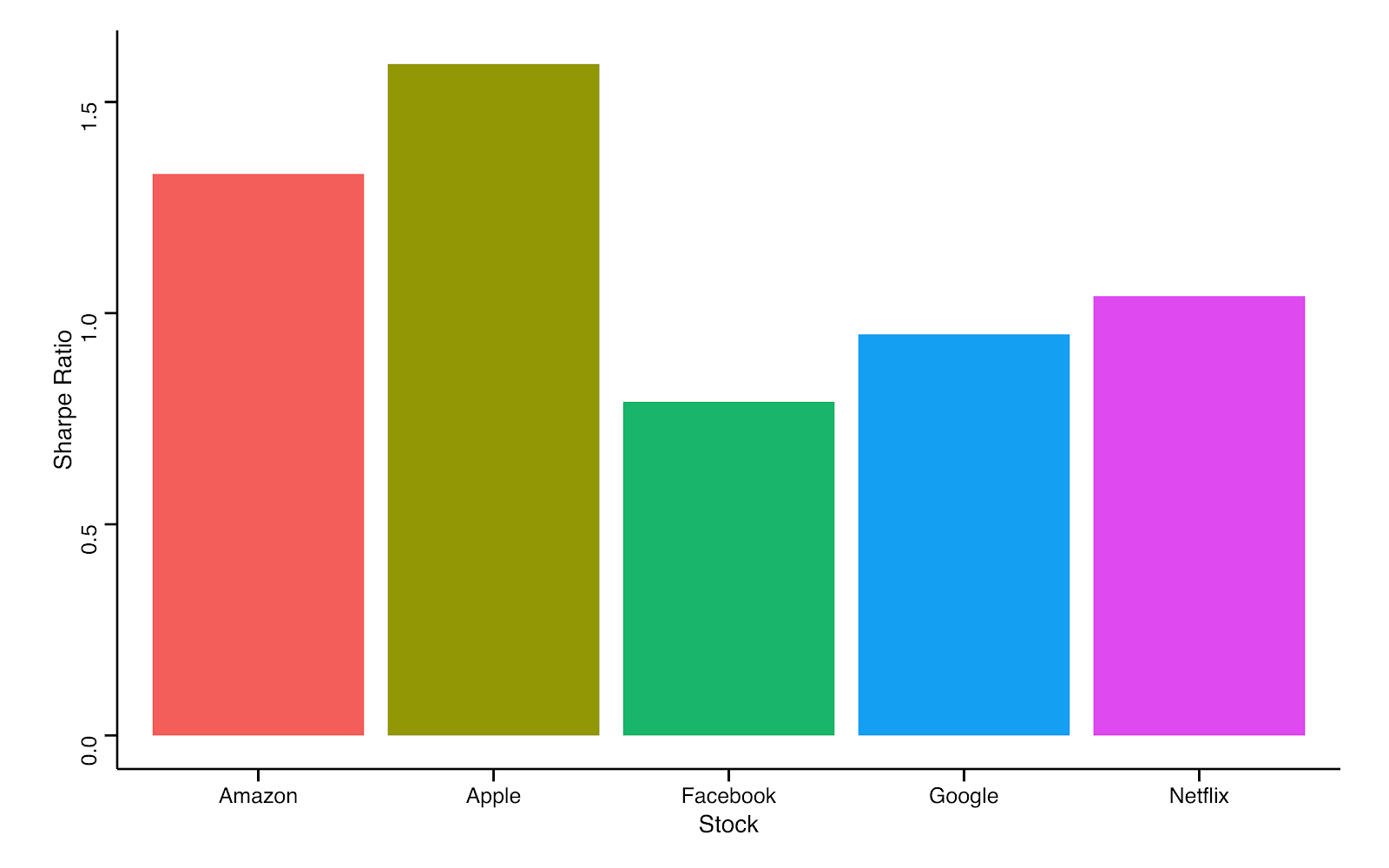 Sharpe ratio for each FAANG stock

Previous reports show that Bitcoin was a better risk-adjusted option than investing in United States stocks or gold after BTC’s halving. However, when looking at FAANG stocks in detail and during a more recent time period (between 2017 and 2020), we find the opposite results. Nevertheless, Bitcoin, Ether and XRP still offer a better overall return for the period analyzed but a lower risk-adjusted return than FAANG stocks.

Curiously, Facebook, the only tech company with detailed plans to launch its own cryptocurrency (i.e., Libra), shows the second-lowest cumulative return and the worst risk-adjusted performance of all the FAANG stocks.

For younger audiences, the awareness of tech companies such as Facebook or Apple and the heavy use of their products make them an attractive investment option at first sight. In this linear analysis, they seem to pose direct competition to Bitcoin and other cryptocurrencies and show a better risk-adjusted performance in recent periods.

From a traditional finance point of view, an investor would prefer to invest in a FAANG stock due to the risk-return reward. However, the higher cumulative returns — double in some cases — offered by either cryptocurrency analyzed can tempt enthusiasts and younger audiences to still focus on Bitcoin and other cryptocurrencies.