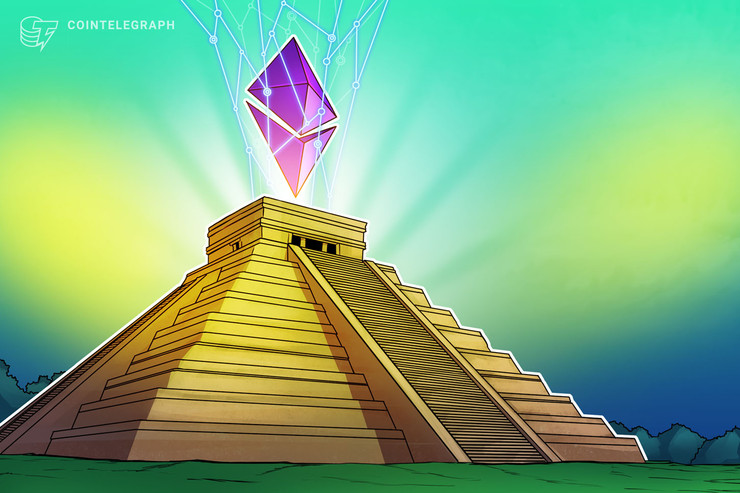 On Feb. 1, part of the Ethereum (ETH) blockchain became anonymous. This is all thanks to the Aztec protocol that Thomas Walton-Pock and his team launched on the network’s mainnet last week.

Aztec is designed not only to provide a high level of privacy on the ETH blockchain but also, according to its creators, it can significantly reduce transaction costs. Besides, as expected in the nearest time, users will be able to release their assets using the Aztec development toolkit.

The Aztec protocol is already known in the Ethereum community with the ETH blockchain previously used to convert the Maker DAI stablecoin into an anonymous asset. The accumulated experience has helped the Aztec developers realize the best compilation of ideas to improve the Ethereum network. What makes this stand out is the technology of zero-knowledge proofs (Zk-SNARK), which allows to hide transaction amounts using tokens with a high level of anonymity.

The abbreviation Zk-SNARK stands for “Zero-Knowledge Succinct Non-Interactive Argument of Knowledge” and refers to a proof model where one can prove the presence of a particular piece of information, for example, an amount of tokens or a secret key, without revealing this data.

Something similar has already been implemented in the Zcash (ZEC) blockchain, where the information about a sender and a recipient of the transaction, as well as its value, is hidden. However, unlike ZEC, the first version of Aztec launched on Ethereum does not hide the addresses of the recipient and sender — at least for now.

The system runs on the Aztec Cryptography Engine smart contract, which validates transactions. The validation process is as follows: When a user transfers tokens, the system encrypts their amount in a separate note thus generating a proof of correctness. As a result, it becomes impossible to see the coins in the recipient’s account. The user can see notes, instead, which are a kind of promise or a claim for the number of coins they were sent.

The Aztec project has already received support from ConsenSys, JPMorgan, A.Capital, Libertus Capital and Coinbase. Notably, its team is trying to make Vitalik Buterin’s old dream come true. Earlier, the founder of Ethereum has repeatedly stated that he would like to implement private transactions in his brainchild. So far, it has been possible to achieve a certain degree of anonymity only with third-party Ethereum mixers.

Related: Cryptocurrency Mixers and Why Governments May Want to Shut Them Down

Mixers operate on the following principles: Coins belonging to service users are divided into small portions, after which they are mixed in a random order several times and then get sent back to the users minus a commission. As a result, tracking the source of transfers becomes almost impossible.

How to use Aztec for anonymous transfers

In total, according to the developers, there are two options to conduct private transactions using the Aztec protocol. The first option allows everyone to use Aztec to create a token that supports anonymous transfers.

The second option refers to the creation of private versions of existing coins whether it’s ETH or ERC-20 tokens. Tokens themselves are supposed to get converted into notes, which are an encrypted representation of the value and are tied to the original coin in a 1:1 ratio.

Created copies are stored in special Aztec repositories. Charlie Cowan, one of the project developers, expects to create an entire infrastructure based on privacy. He also noted that the issue of keeping personal data confident might soon turn into a matter of urgent importance, given that all users’ financial activity may soon become visible on the public blockchain.

What to expect in the coming year?

Currently, the network supports only ZkDAI — a private version of MakerDAO’s stablecoin. Meanwhile, Aztec developers promise to issue other tokens over the next few weeks and provide users with full access to the creation of custom coins in two months.

The team has also said that the project’s ultimate goal is to create the so-called “triptych privacy” that could completely hide a separate part of the Ethereum blockchain. The team’s next step will be adding a particular function to hide the identities of the sender and recipient. Walton-Pocock said this feature could be added later this year. He added that the company intends to launch PLONK — SNARK’s ultra-fast universal proof — that will ensure the execution of closed smart contracts with a single trusted setup.

Aztec developers have also announced their plans to release a full version of the open-source Aztec protocol sometime in the future. It will supposedly include anonymous voting on management mechanisms, anonymous personal data management systems — validating a user as a member without revealing the identity — and a decentralized, zero-disclosure cryptocurrency exchange that will allow people to trade Aztec assets without transaction values being publicly exposed.

Until recently, the Ethereum network has been experiencing problems with processing large numbers of transactions. With the Aztec solution based on Zk-SNARKs, the true anonymity of Ethereum may finally become a reality.

Zk-STARKs was implemented during the Istanbul hard fork in December — is designed to increase the network scalability. Besides, according to the developers, the update reduces the cost of gas of various operating codes to prevent spam attacks and increase the network’s resistance to denial-of-service attacks.

StarkWare, a startup that specializes in blockchain scaling solutions, said that Ethereum has tremendous potential for scaling following the hard fork. According to its data, the scale of Ethereum operations at the first blockchain level can be increased 2,000 times.

Related: Istanbul to Berlin: Ethereum Milestones on the Road to Serenity

The second part of the upgrade — Berlin —  is expected to be released in 2020. The exact date is not fixed, though, as the developers have recently reported that it can potentially be delayed. Berlin is supposed to include proposals, the implementation of which requires more time to test, for example, the actively debated EIP-1057 — a modified programmatic proof-of-work mining algorithm aimed at reducing the influence of ASIC devices.

Ultimately, as the developers hope, upon the completion of both upgrades, that the Ethereum network will become faster, cheaper and more scalable. They expect all of this to be achieved without compromising the decentralization and flexibility of the network.