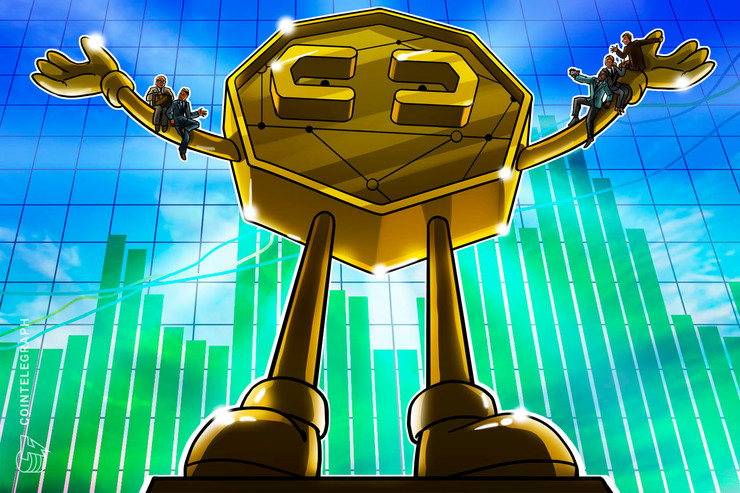 Today, as Bitcoin price (BTC) strives to achieve a new high, the crypto market achieved a $300 billion market capitalization. Over the past month, the figure has steadily increased from $218.4 billion to $303.1 billion, and the total market cap has gained 65.92% since the start of 2020. 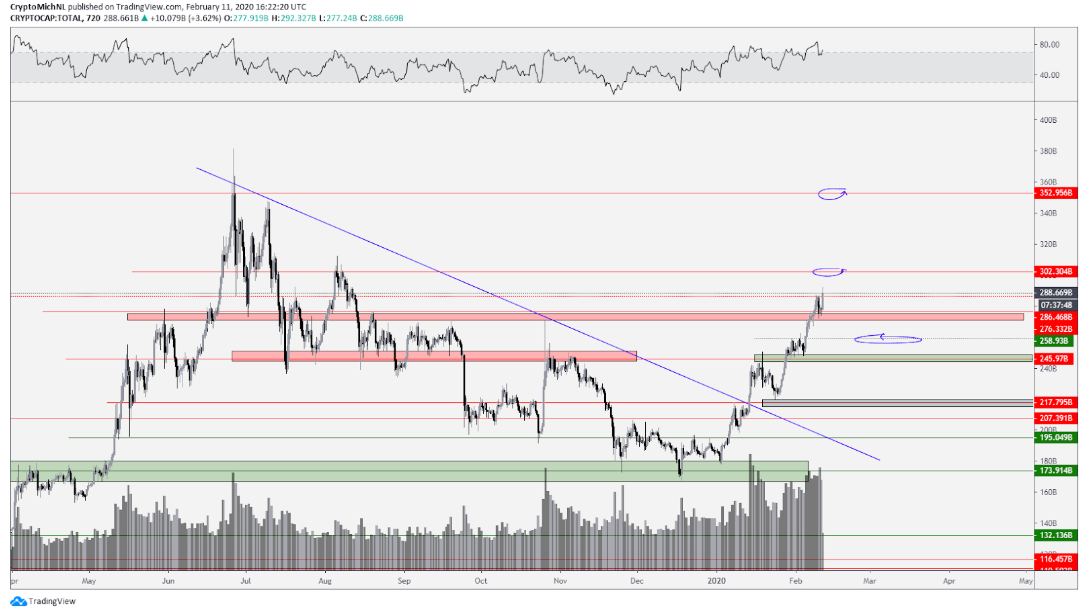 Van de Poppe posted the above chart and said:

“The chart is showing a clear support/resistance flip at $245 billion, after which the market capitalization continued to rally upwards. The next target area is found at $285 billion and $300 billion…This gives the impression that continuation towards $300 billion is warranted, which would then be tested as the next resistance level.”

When asked about what he saw potentially occurring in the crypto market after the $300 breach of the $300 billion market cap, Van de Poppe said:

“I do believe that the market has found the bottom, as the market made a higher low in Q4 of 2019 and is now pacing up for a new higher high. It’s also likely that altcoins will start to outperform Bitcoin in the coming period, as altcoins perform the best when Bitcoin moves up at a calm pace. This should mean that Bitcoin dominance starts to drop more.”

Bitcoin is bullish but holding $10.4K is key 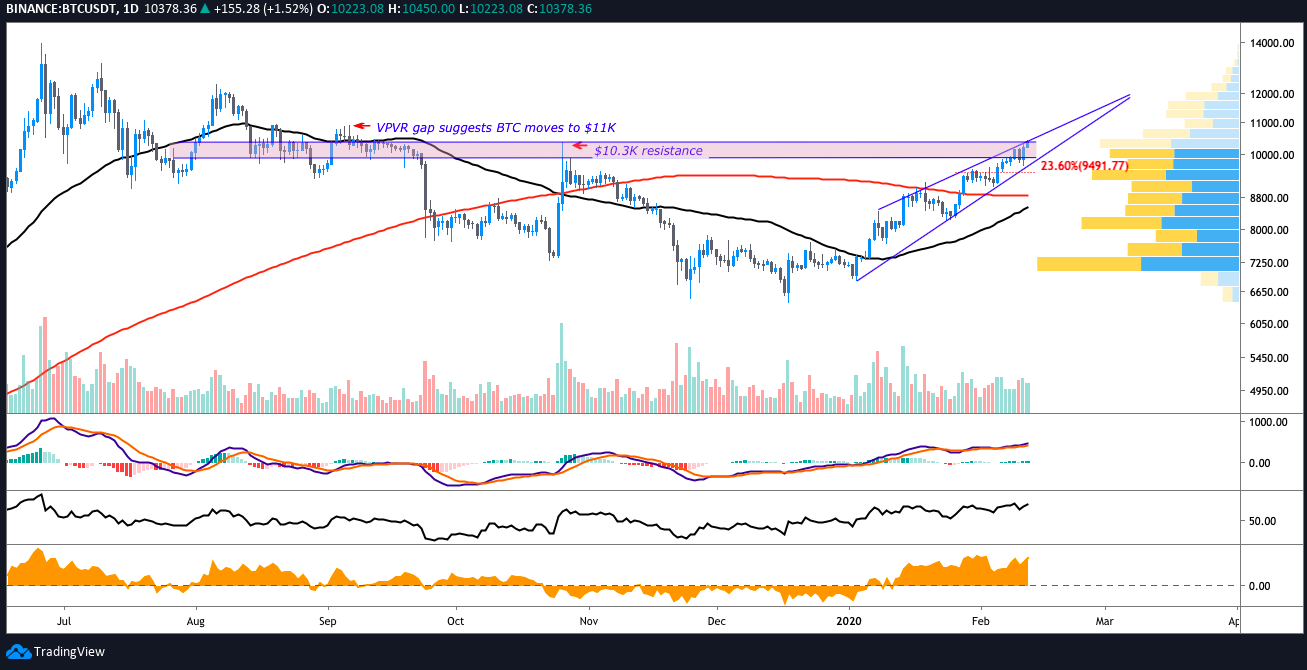 Meanwhile, since the beginning of the year, Bitcoin’s dominance rate has dropped from 68% to 62% with many altcoins seeing double and even triple-digit percentage rallies.

Currently, Bitcoin bulls are fighting to push and hold the price above the $10,300 to $10,400 resistance. Traders have pushed as high as $10,450 but the last three attempts to cross above it have been rejected at the overhead trendline of the ascending wedge pattern. 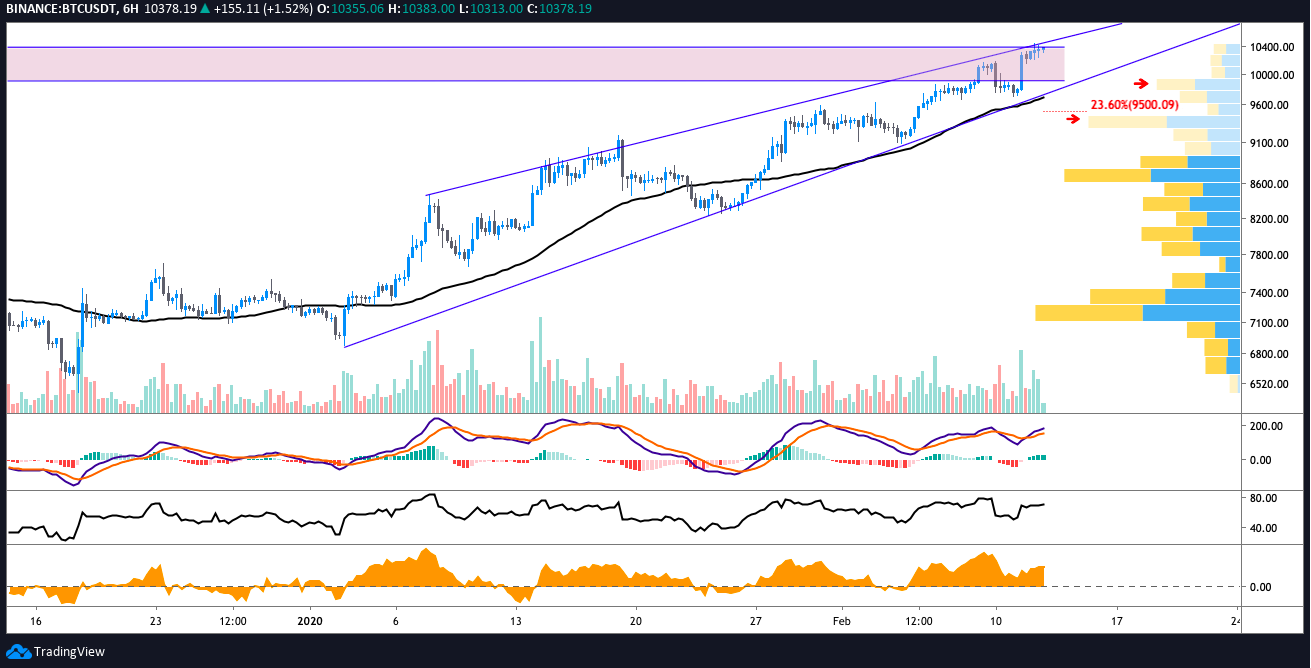 If the price drops from the ascending wedge, the traders will show their interest at $9,450, which is slightly below the 23.6% Fibonacci retracement at $9,500. Given that the majority of recent dips have been bought into at higher levels than expected, traders anticipating a pullback might set their buy orders slightly higher than the supports where bounces are expected.

As the price continues to fight the $9,300-$9,400 zones, some things to watch for would be any declines in purchasing volume on the shorter time frames and whether or not the pattern of higher lows is broken on the 6-hour and daily timeframes.

These signals would hint that an ascending wedge breakdown could occur but given the current state of the market, this scenario seems unlikely.

Institutional appetite continues to grow amid bear market — BitMEX CEO
Is the bottom in? Crypto community shares their thoughts
What is a cryptocurrency mining pool?
Anonymous makes numerous allegations against Yuga Labs and its Bored Ape Yacht Club
7 Ethereum developers would like to sell you on the Merge