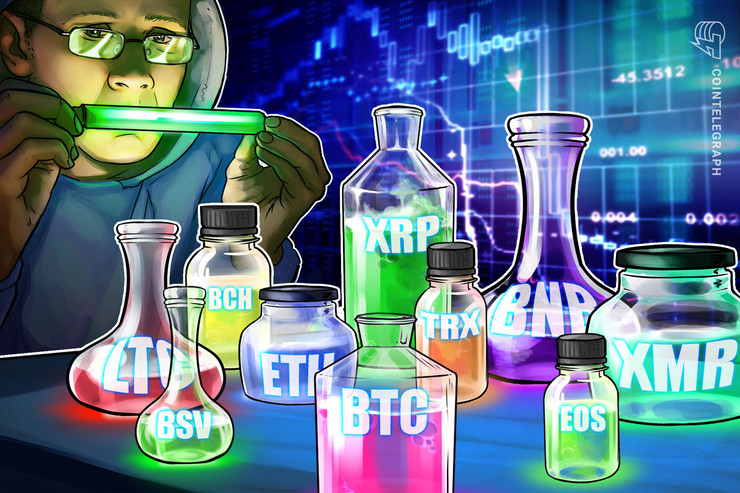 The crypto space is making a comeback and the rally is being led by altcoins. While several altcoins might participate in the initial rally, we believe that the market will start differentiating between each cryptocurrency based on its fundamentals. Hence, traders should avoid buying the non-performers expecting a repeat of the previous bull market when every altcoin staged a parabolic rally.

When compared against altcoins, Bitcoin (BTC) has been an underperformer over the past few days. Its dominance rate, which had risen above 69% on Jan. 8, dipped below 66% on Jan 15. On Jan. 14 Bitwise Asset Management withdrew its Bitcoin ETF proposal pending with the United States Securities and Exchange Commission (SEC) and this means the wait for a Bitcoin ETF just got longer.

Asset manager WisdomTree plans to launch a regulated stablecoin in the US, backed by assets such as gold, fiat currencies or government debt. This shows how some of the larger traditional players are gradually making an entry into the crypto universe.

As blockchain gains wider acceptance, its demand is likely to shoot up. LinkedIn Learning, an educational subsidiary of professional social network LinkedIn, expects blockchain to be the most sought after hard skill in 2020.

A few major cryptocurrencies have rallied sharply in the past few days. After the recent rise, how should the traders approach them? Let’s analyze the charts to find out.

After a few days of consolidation, Bitcoin (BTC) has resumed its journey towards $10,360.89. The up move might face resistance close to $9,500 but as the bulls are back in the driver’s seat, we anticipate the resistance to be scaled.

The sentiment has turned from sell on rallies to buy on dips. Hence, any dip to the 20-day EMA should be viewed as a buying opportunity.

Our bullish view will be invalidated if the price turns down from the current levels or from $9,500 and plunges below the critical support at $7,856.76. Traders can trail the stops on the long positions to $7,600.

Ether (ETH) skyrocketed on Jan. 14 and easily scaled above the $151.829 to $157.60 overhead resistance zone. This shows that the upside momentum is picking up. Currently, the price is facing minor resistance at $173.841.

If the price scales above $173.841, a move to $197.75 is possible. The moving averages have completed a bullish crossover and the RSI is near the overbought zone, which suggests that bulls are in command.

However, if the bulls fail to break above $173.841, the ETH/USD pair might remain range-bound between for a few days. Traders can book partial profits closer to $170 and trail the stops on rest of the long positions at $150. Our bullish view will be invalidated if the bears sink the price below $151.829.

The rally on Jan. 14 has carried XRP above the overhead resistance at $0.2326. This up move has completed a bullish inverted head and shoulders (H&S) pattern, which has a minimum target objective of $0.278. Above this level, the next target to watch out for is $0.31503. The traders can initiate long positions at current levels and keep a stop loss at $0.19950.

The moving averages have completed a bullish crossover, which also points to a likely change in trend. Our bullish view will be invalidated if the bears sink and sustain the price below the neckline of the inverted H&S pattern.

After consolidating for three days, Bitcoin Cash (BCH) surged on Jan. 14 and scaled above the overhead resistance at $306.78. It is currently facing resistance at $360, which is an important level to watch out for.

If the price does not give up much ground from the current levels, it will indicate that the bulls are in no hurry to book profits. A tight consolidation near $360 will increase the possibility of a break above it. Above this level, the next target is $423.40.

The traders can trail the stops on the remaining long positions to $300. The BCH/USD pair will lose momentum if it breaks and sustains below $306.78.

Bitcoin SV (BSV) broke above the previous lifetime high of $255.62 on Jan. 14 and surged to a high of $458.74. The traders who had gone long on our suggestion were up by about 380% near the highs. We never expected this kind of a rally, hence, we are pleasantly surprised by it.

Though in the previous altcoin season, the returns on altcoins were huge, the current run in the BSV/USD pair is more news-based. Hence, volatility is likely to remain high.

Such violent rallies are hardly sustainable. Equally, it is difficult to predict where the rally would end when backed by strong momentum. Therefore, we suggest traders book profits on intraday rallies on about 75% of the remaining position and keep a small position open with a trailing stop loss that can be a little deep.

Litecoin (LTC) has reached the first target objective of $60 where it is facing some resistance. The RSI has also jumped into the overbought territory, which suggests a consolidation or minor correction is likely.

The traders can book partial profits close to current levels and trail the remaining long positions with a stop loss at $52. Our bullish view will be invalidated if the bears sink the price below $50.

EOS broke above the resistance at $3.69 and came close to the next target at $4.24 on Jan. 14. This is a positive sign and it indicates that the trend has changed from bearish to bullish. As the RSI is deep in overbought zone, the altcoin might consolidate at the current levels for a few days.

If the price does not give up much ground below $3.50, the possibility of a move to $4.8719 increases. Traders can trail the stop loss on the remaining long positions to $3.4.

However, if the correction from the current levels sustains below $3.5, the EOS/USD pair can retest the breakout level of close to $3.0.

Binance Coin (BNB) closed (UTC time) above the overhead resistance at $16.50 on Jan. 14 and extended its gains today, which is a positive sign. This shows that the buyers at keen to enter at higher levels.

The next target is a move to $21.80. The moving averages have completed a bullish crossover and the RSI has risen into the overbought zone, which suggests that the bulls have the upper hand. The traders can trail the stop-loss on the long position to $15.90.

Our bullish view will be negated if the BNB/USD pair turns down from the current levels and sustains below $16.

Tron (TRX) broke above the horizontal resistance at $0.0163957 on Jan. 14 and has extended its gains today. The moving averages have completed a bullish crossover and the RSI has risen into the overbought zone, which suggests that bulls have the upper hand.

Conversely, if the bears sink the price below $0.0163957, a drop to the 20-day EMA is possible. Such a move will indicate that sellers are still active at higher levels. We will watch the price action for some more time before proposing a trade in it.

Monero (XMR) bounced off the support at $57.1199 on Jan. 14 and broke above the overhead resistance at $67.02 today. However, the bulls have not been able to sustain the price above $67.02, which shows that sellers are active at higher levels.

Our bullish view will be invalidated if the bears sink the price below $57.1199. We will wait for the price to sustain above $67.02 before recommending a trade in it.

Crypto more popular than mutual funds among millennials, survey shows
Uniswap analysis: UNI price can double based on a classic technical pattern
Ethereum fork a success as Sepolia testnet gears up to trial the Merge
Bitcoin price drops 3% to ten-day lows as Ethereum inches closer to $1K
How low can Ethereum price drop versus Bitcoin amid the DeFi contagion?