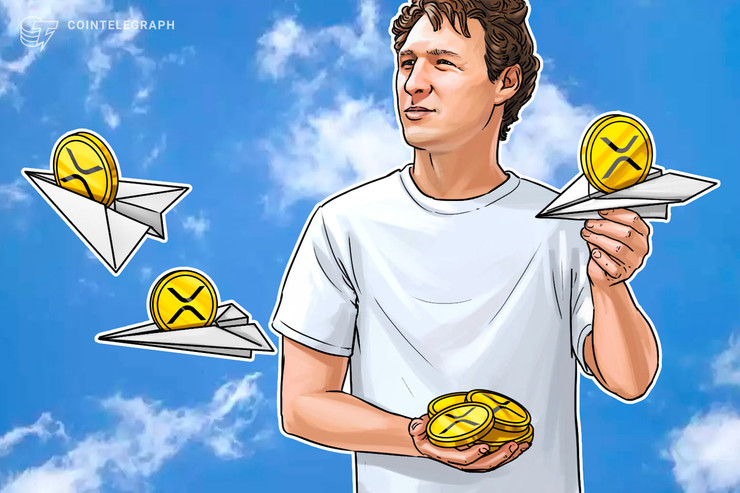 A recent Medium post from blockchain monitor Whale Alert showed that Stellar CTO Jed McCaleb sold off more than 1 billion XRP between 2014 and 2019. The post attempted to analyze whether or not McCaleb’s sale of XRP will affect the price of the crypto. Whale Alert noted that compared with other total trade volumes per day, the amount McCaleb is selling seems insignificant.

Following up on this, McCaleb told Cointelegraph in an interview that it’s strange that so many people are focused on his recent trading of XRP, noting that others have sold much more in comparison. He said:

“I have been transparent from the beginning. The market has known for years that I have been selling my XRP at a slow, steady rate. My investment decisions are not based on any desire to negatively impact other companies in this industry. I think the history to date shows there is no impact on the market, and I don’t see any reason why that will change.”

McCaleb, who served as the co-founder of Ripple until 2013 and is now the CTO of Stellar (XLM), also responded to assumptions that he was dumping XRP to hurt Ripple. McCaleb mentioned that he doesn’t view different blockchain networks to be in competition with one another. He explained:

“We’re all working towards making blockchain a viable, transformative industry. I think we can do that more effectively if we’re supportive of others in the space. For my part, I’m focused on growing the Stellar ecosystem.”

On Aug. 14, 2014, Ripple wrote a post on a company forum explaining McCaleb’s settlement of his XRP earnings. The article details how XRP was distributed among Ripple’s original founders, noting that 20 billion XRP was divided among those individuals.

McCaleb stated that his intention was to sell his portion of XRP. In turn, Ripple Labs engaged with McCaleb to enter a seven-year contract that would ensure the responsible distribution of his XRP stake in a way that would help grow the Ripple ecosystem. A Ripple spokesperson told Cointelegraph:

“In 2016, we entered into a very structured agreement with Jed with the goal of ensuring distribution of his XRP holdings in service to a healthy, growing ecosystem without market disruption, with Ripple as custodian of Jed’s XRP holdings. This agreement remains in place today. Much of this information is publicly available.”

Interestingly, while Ripple posted about the agreement on the company forum in August 2014, Ripple told Cointelegraph that this was replaced with an updated 2016 agreement. This means that McCaleb’s seven-year agreement with Ripple won’t end until 2023.

Whale Alert noted in its blog post that McCaleb’s agreement will expire this year (based on the 2014 blog post). Whale Alert also hypothesized that McCaleb’s XRP profits are being cashed out directly through Bitstamp. However, McCaleb told Cointelegprah that he is selling his XRP on Ripple’s internal exchange.

While McCaleb claims that his recent selling of XRP has not impacted XRP’s market price, others beg to differ. Founder of Quantum Economics and senior market analyst at eToro, Mati Greenspan, told Cointelegraph that McCaleb’s XRP sales are likely a reason XRP has been underperforming lately. He said:

Although logistically this may be the case, an anonymous, well-informed source told Cointelegraph that McCaleb hasn’t been selling enough XRP to impact its price and that, overall, altcoins have been performing better than usual lately.