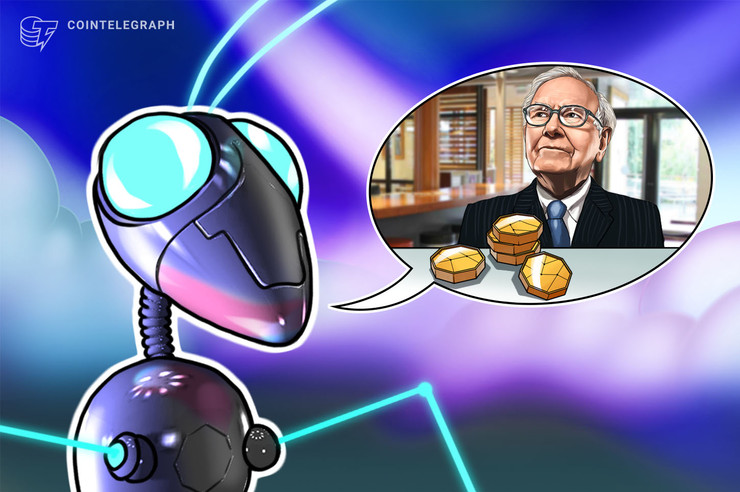 Warren Buffett recently said that he does not own any cryptocurrency, but Tron (TRX) founder Justin Sun begs to differ.

Speaking to CNBC reporter Becky Quick on Feb. 24, billionaire Buffett said that he does not own crypto and derided its supposed lack of purpose:

“I don’t own any cryptocurrency. I never will […] You can’t do anything with it except sell it to somebody else.”

However, on Feb. 25, Sun said in a tweet that he had gifted cryptocurrency to Buffett and that blockchain data proves that the billionaire did not move his gift of crypto assets:

Sun also admitted that, while Buffett “owns” cryptocurrency, he would not define Buffett as a crypto investor. Sun added that the value of the Bitcoin (BTC) and Tron he gave Buffet has already increased by 20%.

Buffett ostensibly received the gift at his famous charity luncheon, which Sun won at auction last year. The two met at a private not-for-profit country club in Nebraska along with other crypto luminaries including Charlie Lee, founder of the Litecoin Foundation, and Chris Lee, the CFO of major cryptocurrency exchange Huobi.

Warren justified his lack of interest in cryptocurrencies by saying that they have no value and that “Bitcoin has been used to move around a fair amount of money illegally.” He is not the first member of the world’s financial elite to express distaste towards cryptocurrencies because of their purported prevalence in illicit activities.

For instance, in February 2018, Bill Gates stated that cryptocurrencies are “a rare technology that has caused deaths in a fairly direct way,” referring to drug-related deaths.

Billionaire Mark Cuban, like Buffet, sees Bitcoin as having no value. He said at the end of September that he would “rather have bananas” than Bitcoin, because he can at least eat them.