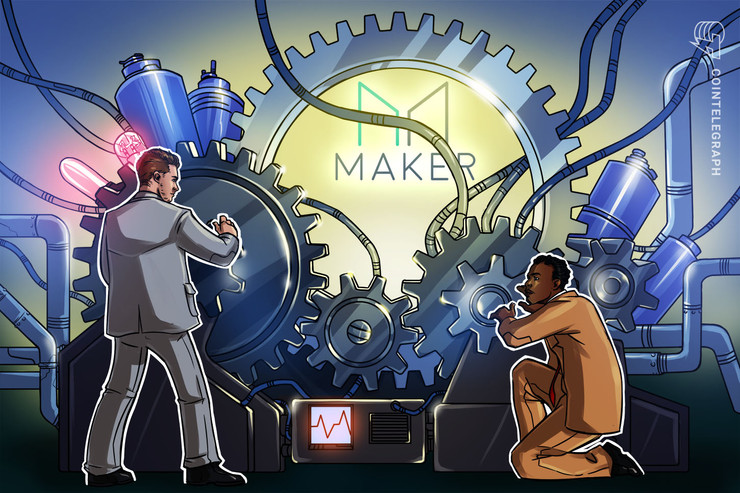 MakerDAO, a leading firm in the burgeoning sector of decentralized finance (DeFI) built on the Ethereum (ETH) network, has hastily called for a community vote on March 13 ahead of the project’s first-ever Debt Auction.

According to Maker (MKR), the vote will decide on needed modifications that were identified during the fallout from the recent crypto market bloodbath — which saw the price of ETH plummet roughly 30% in 24 hours.

MakerDAO is the DeFi protocol that creates the stablecoin Dai (DAI).

Dai are minted by users taking on collateralized debt positions, where collateral — typically comprising ETH — is deposited in an Ethereum smart-contract, and a portion of the collateralized assets’ value being paid out in the form of Dai. The collateral is released back to users when the outstanding tokens are repaid — destroying the Dai in turn.

The collateral is also used to drive the stabilization of Dai’s value, with the network incentivizing either the creation or destruction of Dai depending on whether the token is trading above or below $1.

Loans that can no longer be supported by their collateral enter into liquidation proceedings — where the collateral is auctioned in exchange for Dai to repay outstanding debts.

However, a lack of competition amid plummeting crypto prices meant that some bidders were able to win liquidation auctions in exchange for 0 DAI — intensifying Maker’s debt crisis.

For the first time in Maker’s history, the project will see a Debt Auction — where a systemwide failure in the value of collateralized loans to support circulating DAI triggers a programmatic printing of MKR tokens which are auctioned in exchange for Dai to balance outstanding debts.

As a result of crumbling cryptocurrency prices, MakerDAO currently has $4 million worth of outstanding under-collateralized debt. The auction will result in MKR token holders being inflated. A blog post from Maker states:

“The MakerDAO had a +500k$ surplus before the price drop, and now has a -4M$ surplus that needs to be filled. The protocol covers this issue, the solution being to trigger an MKR mint and auction, the DAI raised being used to fill the surplus debt. During normal operation, MKR is burned when debt from vaults is reimbursed, this would be the opposite mechanism.”

Possible modifications intended to prevent 0 DAI bids from winning future liquidation auctions will be voted on by the community on March 13.